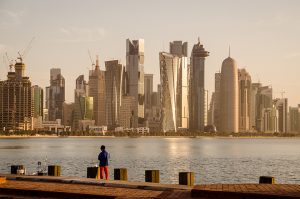 The emergence of the Coronavirus pandemic and a collapse in oil prices have inflicted acute socioeconomic shocks across Gulf Arab states, which now confront the unenviable prospect of managing prolonged economic downturns. Policymakers must consider controversial measures to cut government expenditures and generate needed revenues. Raising taxes – such as the value-added tax (VAT) and excise tax – represents one avenue for boosting non-oil revenue and postponing excessively painful budget cuts.

Gulf governments agreed to implement VAT and excise tax in the aftermath of a previous economic crisis: the oil price shock of 2014/15. VAT is an indirect tax on goods and services that is imposed wherever value is added along the supply chain, whereas excise tax – often known as a “sin tax” – applies to specific goods and services. These taxes provide narrow fiscal levers for the crises of 2020. Yet Gulf Arab states must strike a delicate balance between the demonstration of tax-based fiscal discipline and the harm that new fees may inflict on fragile private sectors and weary consumers.

In May, Saudi Arabia announced plans to triple its VAT rate from 5% to 15% as part of austerity measures intended to shore up state finances. The new rate – to be implemented on July 1 – remains below the average VAT rate in Organisation for Economic Co-operation and Development countries, which is closer to 20%. Nevertheless, the abrupt, mid-year tax hike in Saudi Arabia reflects the most significant VAT development since its imposition in January 2018. The decision is unlikely to triple VAT revenues, which reached approximately $12.6 billion in 2018 and nearly $15 billion in 2019, given expectations of a steep decline in consumer spending. Meanwhile, Saudi-based firms will struggle to incorporate the new tax rate into their business strategies for the remainder of the year.

Proponents of the VAT rate hike in Saudi Arabia view the decision as a demonstrable step toward greater fiscal discipline. Indeed, Saudi Arabia’s dollar bonds gained following the news of the VAT rate increase and other austerity measures. Tapping capital markets can help Saudi Arabia cover its expected deficit for 2020. Continued access to cheap debt, though, requires the projection of sound economic management. The new VAT rate will likely result in a net increase of revenue – although not a threefold increase – and may help develop additional levels of fiscal maneuverability for the country’s policymakers.

The United Arab Emirates (UAE) has not moved in concert with Saudi Arabia. The UAE’s Ministry of Finance announced that it has no plans to raise the VAT rate above 5%. However, the Federal Tax Authority did postpone the due date for March VAT payments until May 28. Prominent private-sector representatives in Dubai requested additional relief and called for Dubai’s government to reduce its VAT rate to 2%. Bahrain, which implemented VAT in January 2019, also made no indication of a planned tax hike. Earlier in 2020, the Bahraini government waived the 5% VAT on electricity and water bills for nationals and expatriates, citing the financial burden on families.

The remaining Gulf Arab states of Oman, Qatar, and Kuwait have yet to implement VAT. Introducing a new tax during this sensitive period would present a different host of challenges for regional governments. Without operating VAT systems in place, these three countries will be hard-pressed to roll out VAT and generate meaningful revenues over the short term.

Oman, Qatar, and Kuwait may consider other forms of taxation as part of their economic policy responses to the current crises. In late March 2020, Sultan Haitham of Oman established a new tax authority by royal decree. Qatar replaced its tax department with a General Tax Authority in 2018, leading some observers to suspect that Qatar might implement VAT in 2020. Both Oman and Qatar levy excise taxes; however, these taxes generate a very small proportion of government revenue. Oman expected a mere $260 million in excise tax revenues in 2019, while the country’s estimated fiscal deficit for 2020 is $11 billion. Stringent measures to slow the spread of the Coronavirus in the Gulf may further limit the revenue-generating potential of excise taxes. Kuwait’s parliament has stymied the implementation of both VAT and excise tax in the country.

Since 2016, regional governments levied VAT and excise taxes – or chose to avoid them – according to national priorities. A similar trend is at work in this moment of crisis. Divergence in tax policies exists not only on the levels of timing and rates but also in the finer details: exemptions and other carve outs, zero rating, and varying definitions of taxable economic activities. The International Monetary Fund estimated that these forms of preferential tax treatment could reduce VAT revenue by as much as 50%. Harmonizing these disparate elements of tax regimes – especially with relation to cross-border trade and refunds – poses future challenges to regional economic integration.

Despite beginning as regional policies, new taxes in the Gulf had become increasingly country-focused initiatives prior to the Coronavirus outbreak and the steep drop in oil prices. The regional dimension of Gulf tax regimes is likely to fall further by the wayside. Each Gulf country must determine the utility of new and existing taxes in light of plummeting government revenues and soaring deficits. The road ahead is bound to be bumpy.

Dr. Robert Mogielnicki is a resident scholar at the Arab Gulf States Institute in Washington. An expert in the political economy of the Middle East and North Africa, he previously served as a senior analyst with the Siwa Group and head of public relations and marketing for Oxford Strategic Consulting, a United Kingdom/Gulf Cooperation Council-focused research consultancy. Prior to his consulting career, he worked as a journalist covering political and economic developments in post-revolutionary Egypt and Tunisia.