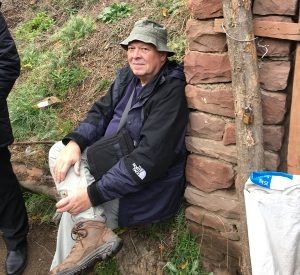 WEF Nexus as a Framework to Evaluate Societal Responses to Disturbance

The WEF Nexus is a convenient means to assess interactions among the three resources controlling the structure and function of human communities and natural ecosystems: water, energy and food. System sustainability depends on maximizing resilience in the interactions among the resources comprising the three-legged stool of the Nexus, but it is challenged by the reality of declining resources and increased demand associated with changing human demographics, land use and climate change. Public health reflects the intersection of water, energy and food, while economics is the overarching control of Nexus sustainability and resilience. 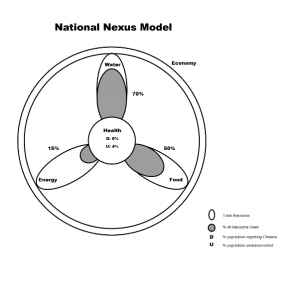 A WEF Nexus model is useful for both assessing national sustainability under existing conditions and gauging societal and ecosystem response resilience to projected and unexpected resource availability and consumption under a variety of scenarios. Tracking annual demand for each WEF component of the Nexus as a percent of resource availability is valuable for predicting the threshold of resource depletion that becomes the tipping point beyond which the resource is no longer sustainable, and the three-legged stool becomes wobbly or tips over if changes in the other WEF components are not made to counteract the negative impacts.

Biomes are geographical areas of comparable physical environment and climate with distinct plants and animals adapted to that set of conditions. Individual biomes are easily recognized (desert, montane, rainforest etc.) and widely distributed globally. Nexus models must recognize that multiple biomes exist within a given nation, and each provides specific services to the WEB reflecting regional climate, elevation, geology and hydrology.

Urban areas are dependent on water, energy and food supplied from the surrounding biome, and increasingly there is an urban-rural disconnect that can have profound effects on Nexus resilience to meet long term trends and catastrophic events. To increase their resilience to address long-term and catastrophic change, the concept of urban biome was coined to recognize that cities have common structure and functions that transcend the natural biome where they are located. Studies have stressed the importance of developing an urban WEF Nexus that can buffer the oft seen urban-rural disconnect observed during long term change and catastrophic events. Resilience of the urban biome is linked to increased self reliance in the production and recycling of water, energy and food.

The current paper compares the response of the WEF Nexus to long term change versus catastrophic change associated with weather events and the current pandemic. Particular attention has been given to the urban-rural disconnect in crisis response.

Climate change and increasing demands on declining resources are currently affecting the Middle East and North Africa (MENA) and arid regions of South America. Increasing aridity from climate change in MENA has resulted in expansion of the Sahara and frequent droughts, while loss of Andean glaciers is having profound impacts in Bolivia and Peru. In both regions, escalating demands on the WEF are associated with human demographics (rapidly increasing populations and urbanization) and expanding agriculture. There is great disparity in the status of the WEF Nexus in MENA ranging from total collapse to over dependence on energy to stabilize the other legs of the stool. Somalia, Yemen and Syria are recent examples of the WEF exceeding its tipping point leading to collapse and chaos. For all three nations, depletion of water resources from excessive irrigation and climate change has resulted in collapse of agriculture and emigration of rural populations to urban centers, leading to social unrest and national economic and political collapse. Additional nations are on the brink of serious problems including Jordan, which has limited water and energy resources and faces rapidly increasing demands from refugee influx and failing agriculture. Saudi Arabia has averted WEF collapse from over exploitation of water resources by prohibiting water intensive agriculture and switching to energy intensive desalinization to supply all domestic needs. Fortunately, the economy is robust enough to support near total food importation and reliance on energy intensive water procurement, but reliance on one leg of the WEF stool to support a nation is not sustainable and is dependent on economic conditions, the ultimate driver of the Nexus.

Climate change has been the major disrupter of the WEF Nexus in Latin America. Droughts have reduced the water supply for Sao Paulo, but both Peru and Bolivia have reached the tipping point for collapse of the Nexus. Both Lima and La Paz are dependent on Andean glaciers for their water supply, which are receding rapidly in response to climate change and will likely disappear in the near future. La Paz has reached a water crisis, and there is a major urban-rural disconnect as rural populations are demanding more water for expanding agricultural production (quinoa), as glacial supplies decline and urban basic requirements accelerate. Associated social unrest in La Paz appears to have been a major factor in the recent replacement of the national government.

The WEF Nexus is currently being applied to the Small Island Developing States (SIDS) within the Caribbean basin. Initial results suggest that many SIDS are approaching the tipping point for one or more of the WEF spokes associated with lack of agricultural capacity, imported energy and overly depleted water resources. In addition to facing long term climate change, the economies of many nations are shifting to tourism as the panacea for sustainability. This is the first tangible example of how a concerted effort to alter the economy, the ultimate control over the Nexus, can either push island WEF resources over the tipping point or provide support to develop best management practices to maintain or enhance resources.

Understanding responses of the WEF Nexus to both catastrophic weather events and the current COVID-19 pandemic is in its infancy. Hurricane Maria, which struck Puerto Rico and several SIDS in the eastern Caribbean in September 2017, is the poster child for catastrophic weather events and recovery times of societies. Although incomplete, most information on the impact of Maria on the WEF Nexus comes from Puerto Rico.

Food production was devastated, water supplies were threatened from watershed deforestation during the storm and associated sedimentation of reservoirs, and power production capacity was reduced. The storm expanded the urban-rural disconnect to a breaking point as infrastructure, including roads and the power grid, was destroyed throughout the island. The response to the disaster focused on urban areas as it was impossible to access most rural areas. It took over 1.5 years to restore electric power to the island. Puerto Rico imported over 80% of its food supply before the storm, and it has been striving to increase local production since. Finally, water resources have been slow to recover. Prior to Maria, the island experienced a major drought in 2015-2016 that seriously reduced total mountain reservoir capacity. The storm disrupted both the potable and sewage networks, resulting in cross contamination and segments of the population forced to use untested, substandard water supplies. Recovery has been hampered by a major drought in 2019-2020 and inadequate funding to repair aging infrastructure. The impact on public health from the failed WEF Nexus is still being evaluated. One clear message from Hurricane Maria in Puerto Rico is the critical need to decentralize infrastructure of Nexus components and to incorporate nature based solutions to fill gaps and maximize resiliency of traditionally engineered infrastructure.

The current exponential spread of the COVID-19 pandemic provides a unique opportunity to examine the response of the Nexus to a major disruption in health, the largely ignored but integrating component of water, energy and food. While the impact of WEF on health has been documented for years, there are few data on heath impacts on critical resources. Current efforts to combat the virus have widen the urban-rural disconnect by focusing almost totally on urban impacts, while down playing potential rural impacts because of low population density. Water, energy and food resources appear to be intact currently, but Nexus stability is threatened by the link between COVID-19 mitigation responses and potential negative economic impacts. Some are advocating a shift from societal protection if the economy begins to show major disruption leading to recession. To our knowledge, this is the first time health and economy have been directly linked without consideration of the WEF Nexus. Current disruptions to the WEF are related to supply chain economics and lack of sufficient infrastructure, but as COVID-19 expands throughout rural areas, agricultural production will suffer from a virus related reduction in the work force.