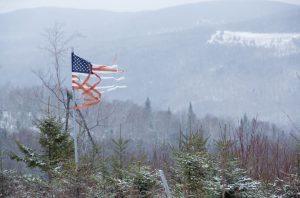 America First is clearly a failed policy – for the United States and the world at large. This Trumpian isolationist doctrine appeals to a small base of nativist Americans who subscribe to hard-core isolationist views. As America pulls back from the very international institutions it helped establish in the post-World War II era, the guardrails for conflict resolution and the protection of our economy erode. Unfortunately, the prior level of American leadership at the WTO, UN, IMF, WHO and NATO, and the ability to deal with the broadest spectrum of crises, is missing. We are witnessing a decline in the strong moral direction exhibited under prior presidents.

We learned in the aftermath of 9/11 that the world is safer when allies coordinate and share intelligence. Open dialogue and engagement with our adversaries can lead to greater security. As the U.S. discards, dismantles and denounces multilateral accords, the country’s influence has diminished. This withdrawal from the table is dangerous for the United States and the world.

The 2016 election was the culmination of an anti-status-quo drift that had incubated for two decades. The beneficiary was a candidate ill-prepared to lead in a time of true crisis. President Trump inherited a strong economy with sustained growth and lowered unemployment. The flourishing stock market and global economic success fertilized and nurtured in the Obama years continued as a matter of inertia. During this economic “sugar high,” President Trump plays the role of domestic and international bully with focus on his real estate negotiating skills and reality TV persona rather than coherent policy.

The United States is erecting legal and physical walls to sever itself from the outside world. At its core, America First is essentially anti-immigration policy and racial division masquerading as a worldview. The manufactured crisis on the southern border is red meat for a narrow base while keeping the America First mantra front and center.

The demeaning of the U.S. intelligence community began in 2017, followed by the hollowing out of the diplomatic corps. Foreign policy expertise is replaced by loyalists and untested family members. Conspiracy theories are substituted for facts. The fear of a “Deep State” coup is mainlined by right wing bloggers for dissemination. As the echo chamber grows, America First permeates the executive branch of government morphing into “Trump First.”

Washington, D.C. is not functioning well these days. Long term policy goals are shelved for short term political agendas. America First congressional enablers play to the same ideological audience as the White House. The dark money invested in politics over decades is now paying dividends. For the Trump sycophants, the electoral process is not about the greater good. It’s about avoiding a primary.

Tariffs are back in vogue, and farmers are treated more as welfare recipients, less as producers. And to what end? Just to dismantle one agreement so that a slightly amended agreement can be bragged about on the evening news?

America First messaging is intended to convince Americans that we are victims, suckers and saps. It also distorts comparisons with prior administrations. America First emphasizes “different” policy rather than “sound” policy. International engagement is a tough sell to a domestic audience, but true leaders opt to educate while accepting the risks of mobilizing rabid isolationists. The easiest applause line in American politics is attacking the foreign assistance budget. Xenophobic messaging can attract a crowd any day of the week. The White House has perfected this communications strategy.

America First disciples don’t discuss the cost of peace against the cost of war. It’s a zero sum game. This new nationalism shuns diplomacy, causing career diplomats with centuries of experience to head for the exits. Unfortunately, we have surrendered the foreign policy playing field when strong moral leadership is needed. As the United States walks off the international stage, the overall global ability to resolve major crises withers. The traditional channels of promoting and transferring America’s exceptionalism are now clogged. Other countries now maneuver to fill the vacuum, negotiate new alliances and provide leadership. Our political and economic competitors fully understand the opportunities of America First.

And thus the stage was set for the 2020 pandemic. Our early and committed action on the intelligence about Coronavirus could have helped the world community act quickly, decisively and scientifically to save lives. However, the downstream wreckage of America First removed he United States from the arena. The disregard for the simulated health crises exercises in 2017, the downsizing of the National Security Staff responsible for monitoring international health crises soon after, and now the estrangement from the World Health Organization originate directly from the America First policy playbook.

Scientific leaders of the world met recently in Geneva under the WHO umbrella to share strategies to defeat the Coronavirus pandemic. The U.S. skipped the meeting. World leaders pledged to accelerate work on tests, drugs and vaccines against COVID-19, and to share them around the globe. Under its America First policy, the United States chose to boycott.

This weak and unenlightened policy shows its fissures during times of global crisis like the Coronavirus. The America First failure is now on display for all to see.

The Honorable Larry LaRocco represented Idaho’s 1st Congressional District in the U.S. House of Representatives from 1991–1995. He is a board member of the Frank Church Institute at Boise State University, and former president of the United States Association of Former Members of Congress.