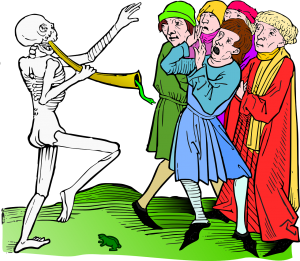 In trying to understand the potential effects of COVID-19 on society, some commentators have looked to the Black Death – the name given to the Yersinia Pestis plague that first ravaged Europe from 1347 to 1351. The Black Death started the Renaissance, caused the end of serfdom and “feudalism,” led to the Reformation and so forth. While such claims are misunderstandings of that period in history, it is worthwhile to examine the Black Death, short and long term, to get a sense of what some consequences of COVID-19 could be and probably will not be.

Drawing lessons from an epidemic over six hundred years ago may appear foolish, but consider responses then and now to the initial outbreak: disbelief; disparaging other countries afflicted by the plague before it reached you; a range of established medical approaches and quarantines plus quack cures; religious finger-pointing; and scapegoating. Fourteenth-century Europeans blamed the plague on a Jewish conspiracy, or on a sinful world; they advised abstinence, penance, even self-flagellation to placate God’s wrath, or turned to lascivious living; people were abandoned or walled up in their houses; a lack of understanding of the disease led desperate people to try a range of cures. Today, we blame China and assault Asians; point at LBGTQ+ people as sinners afflicting the land; we are forced to abandon loved ones; and people search for any cure that might help, including disinfectants and bleach; and still spout that it is a Jewish conspiracy. Today’s world, for all its science, is not so different.

Many historical developments that modern people are attributing to the Black Death were well underway when the plague struck. Dante Alighieri completed his famous Divine Comedy in 1320. Giotto, who died in 1337, was painting three-dimensional figures with more natural poses, garments, and landscapes. Francesco Petrarca was crowned as poet laureate in Rome in 1341. Anticlericalism existed before the plague, with kings and common men railing against the bishops and popes with their furs, jewels, and mistresses; Dante placed many of these in various locations of hell. Religion, however, remained strong. Many ordinary priests and monks went to their deaths serving their parishioners, and religious belief continued to flourish. The military system that many today think of as feudalism was transforming, with contract armies replacing knights who served in exchange for land. The Black Death may have accelerated some developments and delayed others, but the shift from medieval to (early) modern had already begun.

The Black Death did have direct effects on European society. First, it was a recurring event. Y. pestis had become enzoötic in Europe, with major and localized epidemics for centuries. Medieval people were aware of this, referring to the Black Death as the “first pestilence” or the “Great Pestilence,” while a major outbreak in 1361 was known as the Children’s Plague as many of the victims appeared to be children born since the Black Death. Theatres in Shakespeare’s day were closed when plague broke out in London. Although not constant, plague became a part of life.

That presence was reflected in art. Skulls crept into art as memento mori, reminders of death – often in the oddest places, tucked away in a corner. A popular theme for literature and art was encountering a future, dead self. Death was the great leveler and tombs, even of bishops and kings, featured two effigies: one showed the deceased in their glory in life, in armor or robes, while the other depicted a worm-eaten corpse. Following the Black Death, people became concerned with dying well and being prepared for death. Now that life could be cut short so quickly, making a will and being shriven were not acts that could be left for the deathbed. There were even manuals on the subject, copied by hand in the early fifteenth century and then printed.

Was the Black Death a levelling force, allowing for a reorientation of society and economy? It may have made that possible, but it did not happen. No one was immune to the bubonic plague, but those with wealth found it easier to avoid crowded areas and limit their exposure. Furthermore, wealth meant better nutrition and medicine. A series of harvest failures in the 1310s had created a malnourished generation which may have exacerbated mortality, and in England the population level was in decline before the Black Death. Some point to the higher wages and standard of living made possible by the death of so much of the workforce. Less has been said of governmental attempts to fix wages at pre-plague levels. The “golden age” hypothesis also assumes that there was enough work for those who survived. Fifteenth-century Europe fell into a major recession as a shortage of silver coin exacerbated economies reeling from population decline and the Hundred Years’ War. With this, the position of farmers and workers declined.

Looking to the present day and years to come, what are the trends or developments that might advance or accelerate in the wake of the current pandemic? The automation of the shopping experience (online shopping and self-checkout in physical stores) has been spreading quickly, while malls and department stores have been in increasing trouble. Already, bankruptcies are multiplying. Telework has been growing too; with more people working from home (or just about anywhere with Wi-Fi), what will happen to the physical office and to office buildings? Then we must consider the further consequences if these trends intensify. Carbon emissions have been dropping thanks to the lockdown; will telework continue that? There already is a movement toward walkable urban centers and bike lanes; the decline of malls and office parks and easy online delivery could advance that further.

The Black Death did not fix the economy or standards of living and COVID-19 will not either, not on its own. Like its medieval predecessor, COVID-19 has had a disproportionate effect on the poor and minorities in the US, and perhaps even more so in the developing world. As many of my colleagues have pointed out on Twitter and other platforms, patriarchy did not disappear and the situation of women may have worsened in the centuries following the Great Pestilence. Currently, women are being forced to balance work and childcare in new ways, with many forced to give up the former. Change is not going to happen automatically. Those looking for improvements for workers, women, minorities, and others will have to work for it.

Dr. Peter Larson is an Associate Professor and Chair of the University of Central Florida’s Department of History. Larson’s research focuses on the social and legal history of premodern England at the local level. His book, Conflict and Compromise in the Late Medieval Countryside: Lords and Peasants in Durham, 1348 to 1400, is a study of the reactions of lords and peasants in County Durham as they struggled to put their lives and society back together in the half-century following the Black Death.