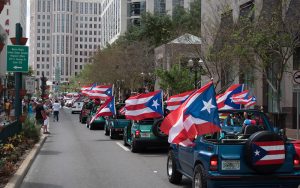 Crisis, Torres argued, is a phrase that can overshadow the people most badly affected because others suffer, too. Pointing to devastating events like the Pulse nightclub shooting and Hurricane Maria, she noted that mass media largely treated these as an attack on the LGBTQ+ community or a particularly bad storm year with more emphasis on the damage caused on the Gulf by Hurricane Irma.

These events, as well as the racially charged election of 2016 and the debt crisis in Puerto Rico, prompted Torres to conduct an ethnography of the Puerto Rican community in Orlando, focusing on those engaged in activism. She described the recent influx of Puerto Rican migration to Florida and, more specifically, to Orlando. With the increasing Puerto Rican population comes increased political attention on the Puerto Rican vote and Puerto Rican activism.

Almost half of the Pulse nightclub shooting victims were Puerto Rican. Torres depicted the struggle of Spanish-speaking family members and loved ones who were desperately trying to obtain information after the shooting. Law enforcement and medical professionals could not adequately communicate basic information or instructions about where to find people because of the language barrier. This made dealing with and processing the tragic events even more difficult for the Puerto Rican community.

Hurricane Maria also highlighted the unequal treatment of Puerto Rico in times of crisis compared to the rest of the United States. Far more attention and resources were allocated towards Texans and Floridians who were hit by Hurricane Irma in the same year. Torres used these examples to show how during times of crisis, the crisis is made worse when it happens to minority groups, like Puerto Ricans. These events and the treatment of Puerto Ricans during these events shapes Puerto Ricans activism.

Describing activism in Central Florida, Torres pointed to a “crisis of representation” and the exclusion of women in meaningful community positions and political action. Torres said the lack of Puerto Rican representation in positions of influence has affected how Puerto Ricans see themselves in the political process. Women, in particular, are underrepresented and discouraged from running for positions, even though they often make up the unpaid, supporting backbone in many movements. The result is large populations of Puerto Ricans living in communities where decisions made by non-Puerto Ricans, and often men, affect housing, job creation, health issues, social integration and education.

Torres concluded by advocating for an intersectional approach to activism that addresses racial, gender, and queer issues as unified a coalition. She expanded on that thought during the question-and-answer portion of the event. One participant asked how Puerto Rican activism fits into the current fight for racial equality around the world. Torres answered that she believes Puerto Ricans should be joining the movement with the black community in the fight for justice, not as outside supporters. Torres pointed to afro-Latinos who operate in both the Puerto Rican and black communities, and called again for more intersectional activism.

Another participant asked Torres who some of her favorite female activists and writers were. Torres cited Kimberlé Williams Crenshaw, the scholar who developed the theory of intersectionality, as a major inspiration to many Latina women authors and activists.

This event was hosted with the support of UCF’s Office of Global Perspectives and International Initiatives (GPII). It was moderated by Katie Coronado, Associate Professor with the Nicholson School of Communication and Media and GPII’s Special Advisor for Latin America and Media. The event also included comments from Puerto Rico Research Hub Director Fernando Rivera, Ph.D. For more information about the Hub or events like these, visit ucfglobalperspectives.org.