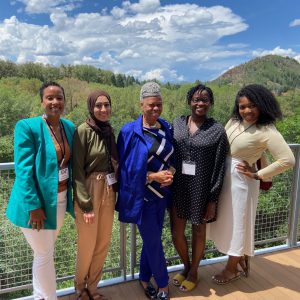 For almost two decades, I heard about the International Career Advancement Program (ICAP). Based on the alums I met, I knew instinctively that it was an extraordinary initiative.  In March 2021, I received a request from one of my esteemed diplomatic colleagues, Ambassador Ruth A. Davis (Ret.), to serve as a senior advisor for the 2020 ICAP Fellows since she was unable to take part this year.  It was my honor to represent Ambassador Davis and the University of Central Florida.  I am eternally grateful to have interacted with 33 promising mid-level young global leaders.  They epitomized the value of intellect, civility, and respect. They gave us welcomed access to the next generation of senior U.S. leaders in foreign affairs.  Several ICAP alums now hold key positions in the Biden Administration.

ICAP, in its 23rd year, is the vision of its founder and director, Dr. E. Thomas Rowe.  He is a former Associate Professor, Associate Dean and Dean of Josef Korbel School of International Studies at the University of Denver.  He is also Co-Founder, Senior Advisor and Treasurer of the Global Access Pipeline (GAP) and serves on the Executive Board of the Denver Council on Foreign Relations (DCFR).

It was an honor to interact with many bright mid-level officers from:  The Department of State both Foreign Service and Civil Service, The Departments of the Navy, Labor, Commerce, The International Trade Administration, The U.S. Agency for International Development, the Service Employees International Union (SEIU) and a Director for Studies Abroad at the University of Portland. The 2020 cohort also included policy analysts, civic and social justice activists, a Council on Foreign Relations staffer, NGO representatives, The Cox Foundation, Merck Pharmaceuticals, and Marvin Engineering.  Notwithstanding their impressive accomplishments, they still must navigate the challenges of overcoming conscious and unconscious biases. I was, however, encouraged with their final assessments of the ICAP program’s value as each spoke eloquently about their experience during the closing ceremony. One stated: “This was the first time I entered a room and did not feel like the other.”

The Aspen Institute lived up to its stellar reputation as a center for ideas and profound reflection on issues facing our every-changing landscape. The vistas of mountains, valleys and the even the non-snow-covered slopes in July, were breathtaking.  They reminded us never to take our eyesight for granted. What an uplift to view an expansive landscape of majestic Aspen trees each day we walked to our sessions.  What a joy to take in the regal mountains that surrounded us each day at lunch.

An unexpected encounter with Timothy Mason, a 2008 UCF Graduate who worked in the Office of Global Perspectives with the late John Bersia, added pleasure of being at Aspen. Tim is now the Assistant Director for Energy Mitigation Policy at The Aspen Institute’s Energy & Environment Program.

The substance of the week-long conference surpassed many conferences I have attended in my 58-year professional career. I have not been in the company of such impressive young intellectuals. They represent the ethnic, racial, religious, and gender/gender-orientation diversity that we would like to see in every sector of our society.  Tom Rowe and his selection panel merit high commendation. Each 2020 participant is a powerhouse of knowledge in their field.  They embody the very best of America and, from my perspective, they are as essential to building a positive image of America as the 2020 Olympic Team.

The opening ceremony was led by Tink Tinker, Ph.D., a citizen of the Osage Nation.  He has been an activist in the American Indian communities for four decades.  He spoke movingly about the need to balance the legitimacy of Native culture and philosophy with those who “took” the Native land and imposed Euro-Christian religion and values on the original inhabitants of this country. The ceremony gave all of us time to reflect on how we comport ourselves. The respect he demonstrated towards his ancestors was spellbinding.  His presentation sparked candid observations about our personal perceptions.  We left Aspen with a heightened knowledge and respect for Native American traditions and culture as well as the inherent value of our rich diversity.

My closing presentation focused on “The Art of Listening in Leadership.”  Based on the Q&A session and sidebar conversations, the message generated fresh ways for these talented new leaders to rise to the highest levels of their institutions and bring home more than Olympic gold. They will bring America rekindled respect.