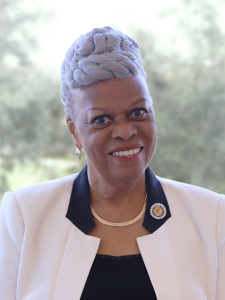 Harriet Elam-Thomas who directed the Diplomacy Program at UCF, is retiring from the university. Some of her career accomplishments include serving as U.S. Ambassador to Senegal from 1999-2003; Chief of Mission to Guinea-Bissau; Acting Director of USIA; Cultural Attaché at the American Embassy in Athens; Country Affairs Officer for Greece, Turkey and Cyprus; Director of the American Press and Cultural Center, American Consulate, Istanbul, Turkey; and in other positions at the U.S. Mission to the United Nations, the President’s Appointments Office at the White House and the Foreign Service Personnel Office. Ambassador Elam-Thomas’ additional posts abroad were in France, Mali, and the Ivory Coast.

She is also the recipient of numerous awards including the U.S. Government’s Superior Honor Award, the Lois Roth Award for Excellence in Informational and Cultural Diplomacy, and a Group Superior and Meritorious Honor Award for her work in connection with the first Persian Gulf War.

David Dumke, Executive Director of UCF Global Perspectives and International Initiatives said, “We have been blessed to have Ambassador Harriet Elam-Thomas as an invaluable member of our team. She has mentored countless students who have gone on to careers in diplomacy and other international fields.” Originally coming to UCF as part of the State Department’s Diplomat in Residence Program, she stayed in Orlando and established the Diplomacy Program which is now called the Diplomacy, Peace, and Security Studies Program. Among her contributions during her time at UCF, she taught Diplomacy and US Foreign Policy for SPSIA and authored an inspiring autobiography.

The Ambassador is a figure of historical importance; she is a gifted diplomat who broke through the glass ceiling. She is an African American female diplomat who was a trailblazer and role model for many. “UCF was lucky to have her as part of our team,” said Dumke.

In honor of her achievements and contributions to the University, UCF Global Perspectives and International Initiatives is organizing a celebration during International Education Week.