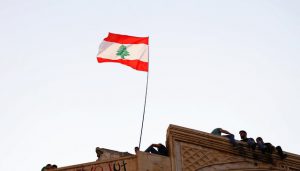 Violence struck the capital of Lebanon on Thursday October 14th, 2021. A Hezbollah-led protest against the investigation into the Beirut port explosion in August 2020 was sent into chaos as someone opened fire into the streets, killing at least six individuals and injuring more than 30 others. Although it is unclear exactly who is responsible for this October 14 act of violence, the Lebanese army, deployed to the scene after the deadly incident began, has announced the arrest of 9 individuals in association with the attack. Witnesses and officials have stated that original shots were fired by nearby snipers who were targeting the Hezbollah protesters, and then some protesters began to shoot in retaliation after acquiring arms. This act of violence then turned into a five-hour clash between rival sectors in the streets of Beirut before an unofficial truce ended the gunfire (Chehayeb 2021a; Varshalomidze & Ibrahim 2021).

On August 4, 2020, one of the largest non-nuclear explosions in history took place at the Beirut port in Lebanon. A mass amount of ammonium nitrate, a hazardous chemical, had been unsafely stored at the port for years, leading to the massive explosion that killed over 200 individuals. Approximately 7,000 additional people were wounded due to the explosion, and many neighborhoods near the Beirut port were completely destroyed. Recent estimates have suggested that around 77,000 buildings were destroyed or damaged in the explosion, leaving almost 300,000 people without a home (Al Jazeera 2020; Al Jazeera 2021; BBC 2021). Despite the massive loss and injury of life and property near the Beirut port, accountability has been an ongoing challenge in Lebanon. Immediately following the blast, Lebanon’s government collapsed due to public pressure and criticism surrounding the storage of dangerous chemicals at the port, of which officials were aware (BBC 2021; New York Times 2021). In the wake of August 4 and public protests demanding accountability, Prime Minister Diab’s government resigned, although he remained in a caretaker capacity for over a year. In his resignation speech, Prime Minister Diab claimed that the Beirut tragedy happened “as a result of chronic corruption in politics, administration and the State,” stressing the magnitude of corruption in Lebanon that allowed unsafe chemicals to be stored in a warehouse for seven years before exploding and killing hundreds (Al Jazeera 2020; New York Times 2021).

The extent of the Lebanese government’s involvement in the port explosion is at the center of the ongoing investigation which escalated to Thursday’s tragedy. Judge Bitar is the second and most recent judge in charge of the investigation into the Beirut port explosion, which has been rampant with obstruction and has yet to charge anyone for the explosion. The first judge was removed after an attempt to charge political officials, including former Prime Minister Diab, with negligence and responsibility for the loss of life. While Judge Bitar has attempted to charge and investigate political officials, including former Prime Minister Diab, the officials have refused to submit for questioning. Additionally, immunity for some senior officials remains in place, obstructing the investigation. The political system itself in Lebanon has hampered the investigation, and various elites in Lebanon have also threatened the ongoing investigation. Judge Bitar has caused concern amongst some in Lebanon, chief of whom is the Shia Muslim Amal party and its allied Shia faction, the Hezbollah. Judge Bitar’s investigation into the corruption leading to the port explosion has recently focused on political elites in the Amal party, including former ministers and former Prime Minister Hassan Diab whom he accused of negligence leading to the explosion. In wake of the accusations, Hezbollah Secretary-General Hassan Nasrallah accused Judge Bitar of “politically targeting” Hezbollah and allied Amal politicians. Two ex-ministers accused of corruption attempted to formally remove Judge Bitar from the port explosion investigation, but the investigation efforts resumed after a brief suspension when the supreme court in Lebanon ruled that Bitar was not guilty of political bias (BBC 2021; Chehayeb 2021a). This ruling prompted the Hezbollah-run protest on October 14th that ended in at least 6 individuals losing their lives.

Members and supporters of the Hezbollah movement and allied Amal faction marched in protest of the ruling that dismissed complaints of Judge Bitar’s political bias on October 14, 2021. Hundreds of individuals gathered before the Beirut Justice Palace demanding Judge Bitar’s removal before nearby gunfire from the Ain El-Remmaneh neighborhood broke up the protest (Chehayeb 2021a). The protestors were marching through Tayyoune circle, which separates the Christian-dominated Ain El-Remmaneh neighborhood from the majority Shiite Tayyoune neighborhood. The site of the protest and subsequent shooting is also significant because it was the location of the major conflict leading to the Lebanese war in 1975 (Reuters 2021). In a statement following the shooting, the Hezbollah and Amal leaders accused one of the opposing Christian factions in Lebanon of starting this shooting, stating “groups from the Lebanese Forces party dispersed on building rooftops and directly sniped with intent to kill.” However, the leader of Christian Lebanese Forces, Samir Geagea, did not confirm this accusation. Instead, he blamed “widespread weapons that are a threat to citizens anywhere at any time.” The statements of both Hezbollah-Amal and Geagea urged calm on the citizens in Lebanon, and the attempted de-escalation of violence was echoed by Prime Minister Najib Mikati (Chehayeb 2021a).

Definitive responsibility for the recent Beirut shooting is unknown. Lebanon has been plagued with a long history of political corruption and instability. Civil war devastated Lebanon from 1975 to 1990, and the shooting on October 14 signified that the sectarian conflict in Lebanon is far from over. The director of global engagement at the American University of Beirut, Rami Khouri, stressed that the tendency for violence and the instability in Lebanon was indicative of underlying weakness in the political structure of Lebanon, arguing “it is a system that does not serve the majority of the people anymore” (Varshalomidze & Ibrahim 2021). Even Prime Minister Diab, who was later accused of corruption himself, spoke about the deep-rooted corruption in Lebanese politics (Al Jazeera 2020). Human Rights Watch also highlighted the presence of corruption in the investigation, arguing that the current lack of accountability calls attention to the chronic exemption of Lebanese officials from punishment for their misdeeds (HRW 2021). The tensions in Beirut were also exacerbated by the economic crisis. Lebanon has been experiencing economic hardships, including shortages of crucial goods like food and electricity, which were only hardened by the pandemic and destruction from the port. The majority of the Lebanese population is currently in poverty, with civilians unable to access their currency which has lost 90 percent of its value (Chehayeb 2021b; New York Times 2021).

The escalation of violence between rival religious and political sectors on October 14th came at a crucial time in Lebanon. Less than a week after the shooting, the Lebanese government announced that the anticipated election will be held in March of 2022. This election will be the first since popular uprisings in Beirut in the months following the port explosion, which criticized the government and demanded political and economic reforms (Chehayeb 2021b). It is uncertain the exact effect that this dramatic escalation in violent tensions in Beirut will have on the upcoming election of political officials.