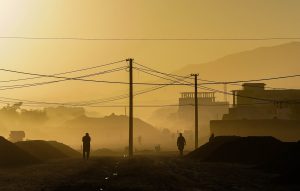 What a difference a year makes. On the tarmac of Hamid Karzai International Airport August 4, 2021, just days before the Taliban rolled back into the capital, pessimism didn’t seem appropriate; it seemed defeatist. The writing may have been on the walls and all roads leading to Kabul, but wasn’t there something more that could be done? Where had the can-do American spirit that had kept us plugging away in Afghanistan for two decades gone? On that final day of a first trip back in over a decade, to a place I had first come almost 20 years prior, a defining chapter in Afghan history and of America in the new century was seemingly coming to a dramatic end. It couldn’t be so.

The night before, at dinner amongst Afghan journalists, government ministers, members of parliament and personnel from President Ashraf Ghani’s office, emotions ran high, but they were not yet defeated. A conflict that for two decades had been largely confined to the Afghan countryside was getting too close for comfort, but the reversal of what had been significant social, political and economic gains over that period was something unimaginable to this particular group. All may have seen this story play out before during the Soviet invasion and its aftermath, but having walked away previously, the U.S., which itself had sacrificed much in the country since 9/11, wouldn’t just abandon them to the fates now when there was still more work to be done and so much on the line; it made no strategic sense, right?

Despite mounting evidence that time, territory and momentum were not on their government’s side, it was perhaps too easy, sitting with men and women who stood to lose everything, to willingly be lulled into disbelief of the facts. Surely, whatever might be happening “out there” was not enough to turn the clock back to a time when adulterers were stoned in the national soccer stadium; too much had changed in 20 years to let that happen. And hadn’t President Biden just pledged additional support to the war effort and didn’t President Ghani present two days prior a new security plan to parliament, one that promised to turn the tide in six months? Surely, not all was lost.

Driving through the city on the eve of my return home, I imagined that it looked like it did most other nights. Swarms of people filled the sidewalks and streets, with guests arriving at the opulent wedding palaces that had become a hallmark not only of Kabul but of Afghan confidence in the post-9/11 period clogging up traffic across the city. If a sign of normalcy and hope were needed, what better one could be asked for? Clearly, prospective brides and grooms, in their special wisdom, knew something that the armchair pundits thousands of miles away predicting Afghanistan’s eminent demise didn’t. They believed there was a better future ahead.

From a ruined city of a half million I first visited in January 2002 – two months after it had fallen to U.S.-backed local forces – Kabul’s population had grown to nearly 5 million by August 2021. Even if a bit rough around the edges, on the surface it had become the showcase of the progress the U.S. had promised but which the Taliban had previously denied. Under the system of government midwifed by the U.S. after 9/11, it was home to the country’s elected parliament, over 20 percent of whom were women, not to mention its first and subsequent elected heads of state. It was a place where, if the popular TV series  Afghan Star was anything to go by, the sky was the limit for the young men and women of the post-Taliban generation.

While security in Afghanistan was a relative term, Kabul after 2001 had been secure from much of the conflict that ebbed and flowed in the country’s border regions and remote valleys between the U.S. military (and its NATO allies), Afghan security forces and the Taliban. Compared to their compatriots elsewhere in the country, Kabulis enjoyed greater personal freedoms and more opportunity. It was this discrepancy, however, between life in the somewhat protected bubble of Kabul (and populations centers such as Herat and Mazar Sharif) and significant swathes of the countryside, where conflict raged over the 20 year span, that largely explains the resiliency of the Taliban and its eventual triumph.

Other factors may have contributed, including external safe havens and support for the Taliban, not to mention government corruption and incompetence, but it was the stark distinction between what was possible in Kabul and realities beyond the city’s limits that ultimately undermined the post-9/11 Afghan-American experiment. Not having equally enjoyed the benefits that did accrue after 2001, not all Afghans at the end of the day felt a stake in further sacrificing for those who did, or perhaps they were just too worn out. This was the reality I left behind last August and to which my hosts finally woke 10 days later, betrayed by their patrons, abandoned by their own president and left to ponder how it may have all turned out differently.

Owen Kirby is a non-resident fellow in the University of Central Florida’s Office of Global Perspectives and International Initiatives. He previously served in Afghanistan’s Kandahar Province with the U.S. Department of State and was a recipient of Afghanistan’s Ghazi Mir Bacha Khan Medal for Government Service presented by President Hamid Karzai and the late King Zahir Shah.