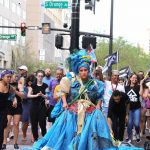 Tell us about yourself in a nutshell. What would you say makes your work unique? I am an interdisciplinary visual artist and UCF Associate professor of studio art. What makes my art unique? I move between disciplines -drawing, sculpture, video and live performance- to best get my points across instead of only working in one […]
Categories: Blogs Global ViewsTags: Art BLM Chuleta Climate Change Coronado COVID-19 Hair LGBTQ Pieta Puerto Rico Raimundi-Ortiz